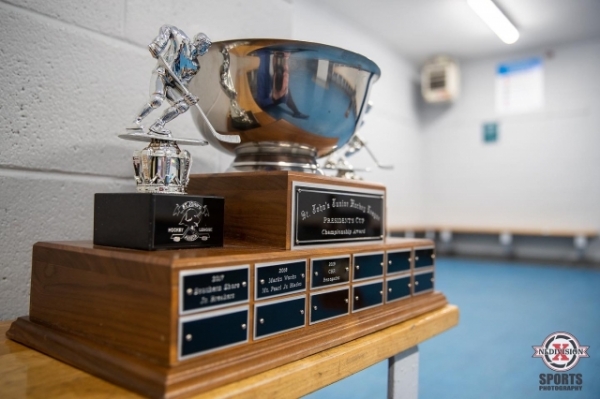 The St. John’s Junior Hockey League is proud to announce the renaming of our League Championship.

The President’s Cup has been renamed the “Gerry Taylor Memorial Trophy”, but will be better known as the “Taylor Cup”.

Gerry Taylor (aka Mr. Junior Hockey) was the Founding Father of the St. John’s Junior Hockey League, and a Life Member of Hockey NL, an honor that was bestowed on him in 2017 for his exceptional and distinguished service to Hockey in the province.

He was inducted into the Newfoundland and Labrador Hockey Hall of Fame in 2003 as an athlete/builder and received the Gold Stick Pin in 2004 for his years of service on the Board of Directors of the provincial hockey association.  He also received the Hockey Canada Meritorious Award in 2006.

Gerry is remembered as the driving force behind the establishment and organization of minor hockey in the City of Mount Pearl. He worked tirelessly raising funds to assist in the construction of the Smallwood Arena. He was instrumental in the success of the St. John’s Junior Hockey League.

He committed many years to the advancement of Junior, not only in his home community but throughout the region, province and nationally. Gerry was also an Officer of Hockey NL representing junior hockey for seven years.

Gerry served on the SJJHL Executive Board from the inception until his passing in 2021.

We look forward to awarding the Taylor Cup in the 2022-23 SJJHL season.