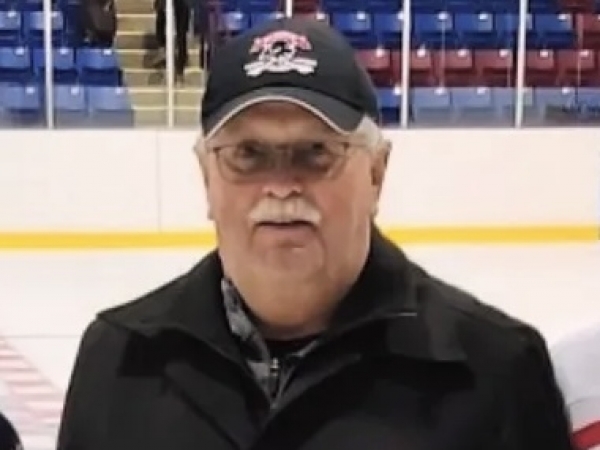 We are very proud to congratulate our Vice President, Jim Hare, on his induction to the Newfoundland and Labrador Hockey Hall of Fame as a Builder in the Class of 2021.

Jim Hare has spent a lifetime laying down the law; in his professional career as an RCMP officer, and on the ice as one of the best officials to ever carry a whistle in this province.

A native of North Sydney, Nova Scotia, Jim first arrived in this province in 1971, when the RCMP transferred him to a detachment in Placentia.

And, while he did involve himself in local hockey in the following two years he spent in Placentia and Harbour Grace, it wasn’t until he was transferred to Corner Brook that his career as a referee took off.

During his five-year post in Corner Brook, he officiated at the minor, junior and senior levels, and spent three years as referee-in-chief for the Corner Brook Minor Hockey Association.

After a work transfer took him to Ottawa for five years in 1980, Jim returned this province in 1985 and spent the next decade in Bay Roberts and Trepassey. During that period, he continued to officiate, and added ‘Instructor’ to his list of credits when he received certification from the Canadian Hockey Officiating Program.

In 1994, work commitments saw Jim on the move again; this time to St. John’s but, despite the change in location, he remained active in hockey circles all over the province.

Among his list of accolades over the last 27 years since his move to the St. John’s Metro region, Jim has been the Avalon Zone Coordinator for Hockey NL officials; the Supervisor of Officials for the Atlantic Pee-Wee championship, the 1999 Canada Winter Games, the Esso National Female Championship in Sydney, Nova Scotia, the Atlantic AAA Midget Championship, and the World Under-17 Championship.

Jim is a certified Level V referee and served six years as Hockey NL’s Referee-in-Chief. For the past 18 years, he’s also been an off-ice official in the professional ranks for the American Hockey League, the Quebec Major Junior Hockey League, and most, recently, the East Coast Hockey League.

When he’s not wearing the stripes, Jim has also served in executive positions with the St. John’s Junior Hockey League, and the Metro Referees Association; has served as head coach of the Mount Pearl Junior Blades; and was a two-time Coach of the Year in the Deer Lake Intermediate Hockey League.

In 2007, Jim was honoured with the Ray Bowe Award for outstanding contribution to the Hockey NL Officiating Program.